Squirrel Fanatics Are at It Again 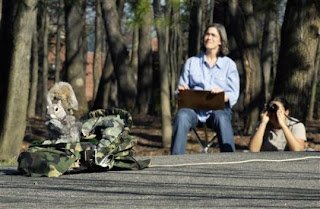 The Alameda Daily Noose and I are flabbergasted. As if real Squirrels were not bad enough, someone actually had the bad judgment to fund researchers who have created mechanical Squirrels, which are sure to run amok and threaten Alameda to an even greater extent than it is already threatened! We thought we had seen some real Squirrel enthusiasts, but this takes the cake.

These people are so obsessed with Squirrels that they are actually trying to communicate with the fidgety little critters. Do they think they're going to negotiate a treaty? I mean, come on! We're talking about one of the most devious, least trustworthy types of creatures in Alameda. To actually talk to one of them would be to admit defeat in the Global War on Squirrels.

The Alameda Daily Noose and I are highly suspicious of anyone who would devote such copious time and effort to analyzing the behavior of Squirrels. We don't need to understand them, we just need to defeat them. It's just like when you're invading a country. Every minute spent trying to learn their language, culture, history, and politics is a precious minute that could be spent kicking some enemy butt.