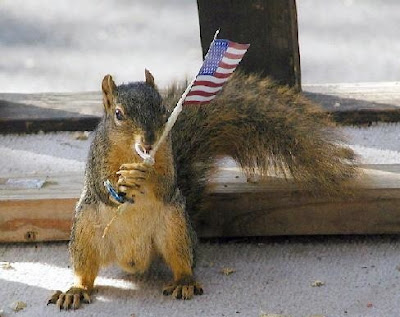 The Alameda Daily Noose and I have learned from sources that the Alameda Squirrel population may be planning on staging a "False Flag" attack in order to justify a fully fledged assault on the human population of Alameda.

Following up on our investigative reporting on terrorist "sleepy cells," the Alameda Daily Noose and I have uncovered another Squirrel Supremacy interweb site which is the online base of operations for the Squirrel so-called "intelligence."

False Flag attacks are military operations in which one group stages a fake attack on their own population in order to generate the urgent patriotism needed to launch a counter-attack against the imagined perpetrator. This technique was used in foreign countries that no Right-Thinking Alamedan has ever heard of, dozens of years ago, but it was more famously documented in the "Gulf of San Leandro" incident, in which the Alameda Squirrel population blew up one of their own walnut trees along the shores of Bay Farm Island, blaming the incident on the Chipmunks. This justified the Alameda Rodent War that lasted over a decade, and finally exterminated every last Chipmunk from the island. (We humans tolerated the battles because, well, we were happy to see those darned Chipmunks go.)

Through our intrepid investigation, we have learned that the Squirrels are ready to try this technique again, probably just before the upcoming election, in order to distract us from going to the polls and voting for the popular Measure "Hate Squirrels." Their plans are to scatter thousands of poisoned acorns throughout the city, enough to kill off several hundred Squirrels, and then blame the incident on the humans. They already have sympathizers in the Alameda Puppy Trainer and the Alameda Fish Wrap, ready to go to press with news stories that call for an all-out war with the human population of our Island City. Their plans, it seems, are to do to the human population of Alameda what they did to the Chipmunks.

If you start running over already-dead Squirrels in the next few weeks as you drive home from your work on the other side of the island, realize that the so-called attack by the humans is not all that it seems. And get ready for an all-out assault from an enraged Rodent population.