Parking Garage a Proven Hazard to Environment and Public Safety 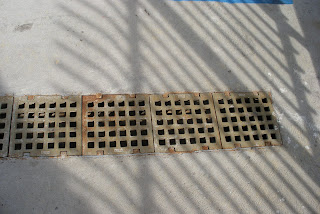 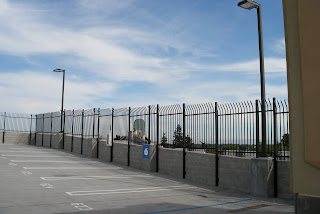 The Alameda Daily Noose and I got a hot tip recently regarding the new, unusable parking garage. We were told that the builders failed to install any kind of fence along the top, where there is a narrow gap between the roof of the garage and the roof of the new Super-Mega-Monster-Plex That Everyone Hates, and also gave no thought to any kind of drainage system for the structure.
Our thorough investigation of both these allegations revealed that, shockingly, they are both almost true! As the exclusive Alameda Daily Noose photos above show, what little fence exists on top of the garage is woefully inadequate. A determined child, especially one equipped with rock-climbing gear, could no doubt get over the top easily, fall off, and become wedged between the outer walls of the Super-Mega-Monster-Plex and the garage.
Similarly, the one small drain located on the roof couldn't possibly have enough capacity to keep up with the scorn that will be dripping plentifully from Right-Thinking Alamedans. With the opening of the Super-Mega-Monster-Plex only days away, the scorn will soon back up the drain and start flowing down the levels of the garage until it roars out into Oak Street, washing away any innocent churchgoers, high school students, or Longs shoppers who might be in its path.
It is doubtful that either of these nightmare scenarios was considered in the environmental impact report for the so-called project. By the time a thick layer of children has accumulated in the gap, and a thicker layer of scorn on the street, it will be too late to turn back. There will be nothing left but for the Alameda Daily Noose and me to say we told you so.