Shocking Exposé Finally Reveals Who's in the Developer's Pocket

Last night, as the Alameda Daily Noose and I stumbled home from a big night on the town, we took a wrong turn and found ourselves in a dead-end alleyway: 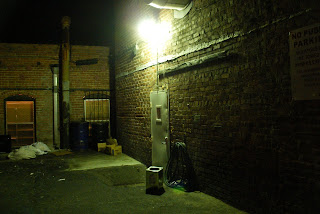 We were immediately suspicious, because we had received no notice of an alleyway existing in that location, whether by mail or via public official knocking on our door and sitting down with us in our living room over a beer to talk over the problem of dead-end alleys ruining a convivial night on the town.

As we stood there in the shadows, collecting photographic evidence and pondering to whom we should complain about the alley, a large man smoking an even larger cigar crept up and rapped out a strange rhythm on the battered door. "Password?" came a gruff voice from inside. "Manhattan," the cigar smoker whispered, and the door swung open just long enough for the Alameda Daily Noose to snap this picture: 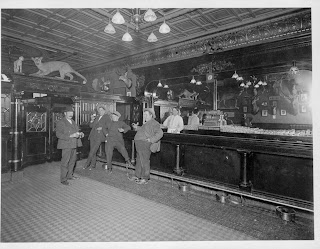 In a flash, we knew that we had discovered the secret location of the legendary speakeasy known only as "The Developer's Pocket"! Right-thinking Alamedans have long told stories of the unsavory decisions that are made in its smoke-filled back room, where Shills and Stooges swarm to receive their marching orders from the cigar-chomping, whiskey-swilling legions of Evil Developers.

Unfortunately, that flash of ours was a dead giveaway in the dark, smoky room . Two Fat Cats, a Shill, and a Stooge gave chase, pelting us with deceptively glossy campaign flyers. Luckily, the Alameda Daily Noose spotted something protruding from a nearby Dumpster: a tattered lawn sign for Former City Council Candidate! Wielding it like a shield, we handily deflected the nefarious flyers and the Fat Cats recoiled in horror, scurrying back to the safety of their lair. Whew, what a close call!

Roger, are there no investigative reporters left? I learned just yesterday that there are feral pigs at Alameda Point. It's been reported locally that those miscreants you fell into want to go "hog wild" out there! Swine deserve the same rights and protections as squirrels!

Oh, Mr. O'Sullivan, this is terrible news. I've always said that there are pigs in this town, and now it's true! The old runways at Alameda Point are already for the birds, and now it seems that the whole place is going to the dogs. What's next -- an alligator in my back yard?