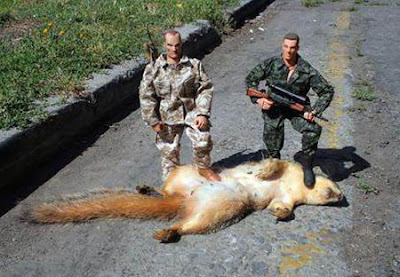 Yesterday, 15 August 2007, at approximately 1700 hours, the Alameda Daily Noose and I had the honor of providing the above photographic documentation of Alameda's recently formed Sciurine Weapons And Tactics (S.W.A.T.) team's first confirmed kill. The S.W.A.T. team called in for support from one of A.C. Transit's newly acquired "Van Hell" Neighborhood Assault Buses, which completely cut off the beast's escape route. The S.W.A.T. team then brought the monster down with two acorn fragmentation grenades and a hail of very-small-arms fire.

Although some lily-livered so-called Alamedans have raised questions about the multi-million-dollar allocation of funds to hire, train, and equip the S.W.A.T. team, Right-Thinking Alamedans recognize that the Global War on Squirrels demands sacrifices, and no price is too high to pay to rid our Treasured Island of this bushy-tailed scourge . . . as long as it's other people's kids who go without textbooks and other people's streets that aren't repaired, of course.

I think there needs to be many more police on the street than there are now. It is important too that they have an "us vs. them" attitude so that even the average citizen is their enemy, especially in Alameda where skwerls and liberals are threatening to destroy us all. Besides, the police need jobs more than rich yuppies and gang bangers.