Despite my repeated calls to the Contra Costa Rag to stop delivery of the Alameda Fish Wrap to my house, it still comes. So, Sunday, I arose to my front porch, dusted off my sun-baked Friday edition of the Wrap, turned to the Editorial page, and what do I see? Nothing less than Sam "Seymour Hearst" or, if you prefer "William Randolph Hersh" Loomis, moving on to greener pastures after merely 16 months at the helm. Mr. Hersh, er, Loomis wrote in his editorial, "I can't wait to get back out on the "proverbial" street again." An interesting choice of words, "street." What else scampers around on the street, skittering from job to job?

Yes, the real reason Sam Loomis is leaving the Fish Wrap is that I was so close to exposing his true identity. As part of my extensive investigative report into why the Fish Wrap was still being delivered to my house, I surprised Mr. Loomis in what I can only assume was his office, which was located centrally in the building, and so full of vegetation that at first I mistook it for an atrium. Yes, Mr. Loomis, better known as "Sammy the Squirrel" from his days as a cub reporter at the despicable enviro-Nazi Ranger Rick Magazine, had managed to hide his Squirrely identity for over a year, all the while using his bully editorial pulpit to preach his villanous screeds against Alameda's Squirrel-limiting "Measure Acorn."

Your readers who don't know what I'm talking about, or those who still deny that the traditional news media have been completely infiltrated by bushy-tailed terrorists, need only open your eyes to the fuzzy reality of this photo I snapped of Alameda Fish Wrap Editor Sam, or should I say Sammy, Loomis: 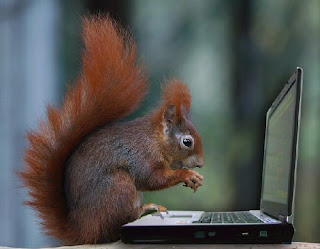 Separately, for those who will take me to task for challenging the local "authorities," I refer you to a book by famous hotelier and entrepreneur, Richard Sheraton, who wrote in his epic tome Familiar Quotations, Little, Brown and Company, 1980, ISBN 0-316-08275-9 - "The newspapers! Sir, they are the most villainous - licentious - abominable - infernal - Not that I ever read them - no - I make it a rule never to look into a newspaper." Interpretation of these remarks is left as an exercise for the readers.