US Army Rangers Photograph taken during recent incursion into Pakistan 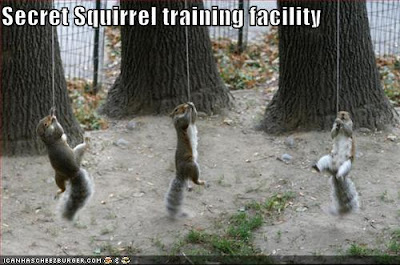 The letter above arrived not through our preferred method of delivery (carrier pigeon), but rather through "gee-mail." Although it would appear to the untrained, non-interweb-savvy eye that the author did not sign his missive, the Alameda Daily Noose and I did a little highly technical investigation and we can report with confidence that the message came from none other than Mr. Herb Albert of Tijuana Brass Band fame. Clearly, he's concerned that his celebrity status might detract from the seriousness of his dispatch from the front lines of the Global War on Squirrels, which is why we've decided to keep his identity a secret. We're only sorry that we can't wish him good luck on his tour of rural Alameda and, apparently, rural Pakistan. Once he and his band give those Pakistani Squirrels a little taste of honey, so to speak, they won't stand a chance!

Of course, we expect our loyal readers to be discreet, and not go spreading this information around willy-nilly via gee-mail, the interweb, pigeon, or what have you. The above image, in particular, could cause a panic if it were to circulate widely. Such delicate matters are best handled by professional journalists, who can avoid tipping off the Squirrels to the intelligence that has been gathered in conjunction with the Army Rangers' Special Operation "I Can Has Cheezburger," (a confusing yet deliciously secretive code name if we've ever heard one). So please, Right-Thinking Alamedans, if you know any folks who are still ignorant of the Squirrel threat, let them ease into it. Just tell them to put on some of those interweb "goggles" that everyone's talking about and type in "Global War on Squirrels" or "World's Greatest Noosepaper," and they will soon see the light.