Squirrel Agenda Not So Secret Thanks to Mr. Delmonte 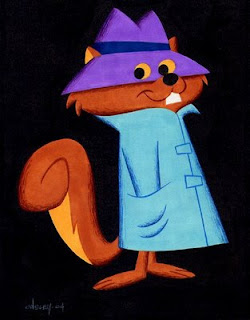 The Alameda Daily Noose and I are well aware that if it were not for our ground-breaking investigative reports, Right-Thinking Alamedans would not be sufficiently angry about the Squirrel problem. It is not merely a problem that threatens the security of nearly every nation in the world, but also one that lurks in our very own back yards. Thanks to our persistent yet not-too-frequent coverage of the Squirrel threat in our back yards, we have inspired countless of our loyal readers (nearly ten of them last time we checked) to send in their own tips on the latest movements of Sciurine troops on this most crucial battlefield, the great island nation of Alameda.

Our latest lead comes in the form of a gee-mail message we received from Mr. Delmonte, who has wisely deferred to our superior judgment in the past when it comes to making head or tails of shadowy figures in the world of Squirrels and the threat they pose to Alameda's tree-density-limiting Measure Acorn, colloquially known as "Measure Acorn":

Yes, my fellow Right-Thinking Alamedans, it has come to this. We already knew that one candidate for the highest office in our land, and perhaps even in Alameda, was a secret Scotsman. Another looks the other way when confronted with blatant Squirrel activity, and now we faced a third, mysterious contender who actually is an admitted Squirrel! Are there no limits to the brazenness of these Fluffy Fascists?

We've said it before, and remind you again, that there is no safe alternative in this fall's election but to write in bold Squirrel-Slayer Mike Huckleberry for President, and the even more culinarily accomplished Heidi Wilson as his Vice President.