As the Alameda Daily Noose and I continued to dig through our overstuffed mailbag following our much-deserved Holiday Hiatus, we remembered that we also needed to check our "gee mail." After sifting through a number of rather personal messages concerning enhancement of parts of a man's noosepaper that should not be mentioned in polite company (these must have been sent to the wrong address, because the Alameda Daily Noose and I have no need for such remedies), as well as some notifications from the British Lottery (these too must have been sent in error, because everyone knows that we have already won), we came across this mysterious little missive:

From: barbara kahn
Sent: Tuesday, January 01, 2008 2:40 PM
To: rogergrumbel@gmail.com
Subject: how do I get you to post htis?
Attachments: cant decide.doc

I am a good Democrat, but an inexperienced blogger.

After a great deal of fiddling around and a few telephone calls to a Silicon Valley technologist and entrepreneur we know, the Alameda Daily Noose and I managed to open the so-called attachment dingus, which reads as follows: 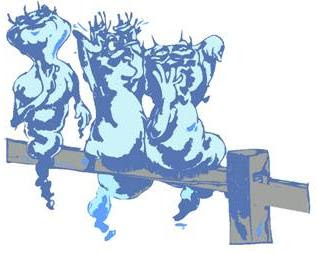 SITTING ON THE FENCE ?
CAN'T DECIDE FOR WHOM TO VOTE ?

COME TO OUR JANUARY MEETING
REPRESENTATIVES OF MANY PRESIDENTIAL
CAMPAIGNS WILL BE THERE TO MAKE A PITCH
AND ANSWER QUESTIONS.

CITY OF ALAMEDA DEMOCRATIC CLUB
MEETING AT THE ALAMEDA HOSPITAL

AS AN ADDED ATTRACTION, MIKE MCMAHON WILL DEAL WITH THE PROPOSITIONS.

The Alameda Daily Noose and I are not sure what to make of all this. First of all, the "gee mail" itself, as well as the so-called attachment, is entirely devoid of praise for us. At first we thought this might be a technical glitch, but another phone call to our friend put that theory to rest.

Now the Alameda Daily Noose and I are not saying that a letter must contain praise in order for us to publish it; after all, we publish every letter we receive, without any editing—unless, of course, it really, really needs our magic touch. Although an occasional letter or six has been known to stick to the bottom of our mailbag, the fact that the letters that get stuck are the ones that don't praise us is nothing but a coincidence. Even so, we encourage our readers to avoid such unfortunate coincidences by remembering to include sufficient praise in each letter.

Now, the thing that really chucks our Corica is the suggestion of any connection between our soon-to-be-award-winning daily noosepaper and those Boring, Lame Online Gossip Shops, better known as B.L.O.G.S. We have long suspected that the B.L.O.G.S. are all run by the Democrat Party, since they both seem to go crazy with trying to change things. In fact, we were about to administer a thorough tch-tch-tching to the suspicious gee-mailer when we noticed that she described herself as an "inexperienced blogger" [sic].

Suddenly, the powerful 100-watt bulb of our understanding blazed to life, and we realized that the only good Democrat Club member is a bad B.L.O.G.-er. Once again, the Alameda Daily Noose and I have put ourselves in harm's way to make sure that you, Dear Reader, could be exposed to this unexpected information without upsetting the proverbial apple cart of your Right Thinking. No, no, that's alright; don't mention it…unless you are writing us a letter.