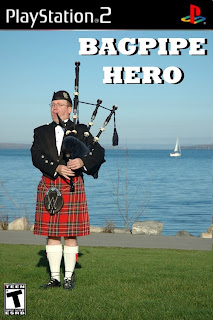 It's time for people to lay off the bagpipe-bashing a bit. There are many of us in Alameda who believe that, if it is done right, a large number of bagpipes can actually coexist harmoniously in a relatively small space. There are parts of our community that could actually be improved by the addition of a few more bagpipes, so let's do our part to accomodate more bagpipes instead of forcing them into more congested urban areas.

Bagpipes can actually have a stimultating effect on a population and its economy. In fact, the presence of bagpipes is one of the reasons that I am able to live happily here. Mr. Census and others should stop trying to blame all of their problems on bagpipes, and start looking at the problems that are being caused by a lack of bagpipes. If you've ever witnessed the pathetic efforts of a lone piper to cover both parts in a duet, you'll know what a tragedy it is when there are not enough qualified bagpipers to go around.

What little bagpiping there is in Alameda is essential to maintaining air circulation on the island. Most people don't realize that we could quickly become enveloped in smog of our own producing if it were not for the exhalations of bagpipers' powerful lungs. You should not be complaining about that bagpiper in your neighborhood, but hailing him as the environmental hero he is. Bagpipers breathe greatly that we may breathe more easily.

If Mr. Census had stayed for more than 30 seconds of the performance on
Saturday, he would have learned that bagpipes are also a healthy alternative to pesticides and other poisons for driving out rats, cockroaches, termites, horseflies, squirrels and other vermin. Those fine, musical lads explained that the powerful vibrations of the bagpipe's drone is too much for inferior creatures to bear, and they go scampering for the nearest way out almost as soon as the music begins. Come to think of it, I think I witnessed an example of such pestilent behavior at the performance in question.