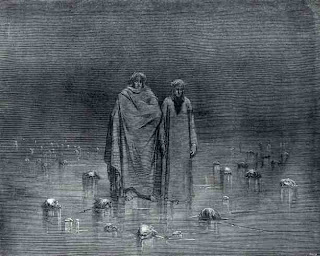 Despite our bitter difference of opinion on the quality of this film, the Alameda Daily Noose and I agreed that one of the best parts was when the hero, Don Tay, first arrives in the Ninth Circle of Hell, which is reserved for the Muzzlers and Bamboozlers who spent their useless lives trying to destroy Measure Acorn. As Don arrives at the shore of a huge, very convincing model of a frozen lake, the movie's narrator solemnly intones:

So, to where modest shame appears, thus low
Blue pinch'd and shrined in ice the Muzzlers stood,
Moving their teeth in shrill Bamboozlement.
Her face each downward held; their mouth the cold,
Their eyes express'd the dolour of their heart.

As great as that part was, our favorite part was the dramatic climax of the film. We don't want to spoil it for those who weren't important enough to be invited to an exclusive sneak preview, so we can't tell you how shocked we were to see Satan depicted in all his computer-generated glory:

Speak of the Devil! To his rear shot forth
A mighty tail, enormous as became
A Squirr'l so vast. Sails never such I saw
Outstretch'd on the wide sea. No plumes had it,
But was in texture like a brush; and this
He flapp'd i' th' air, that from him issued still
A chit-chit-chitting deep within his throat
The likes of which no human ears have heard
Whilst perch'd upon a bench in Jackson Park.

this is a pretty funny website. Keep up the good work. Glad to see people in Alameda still have senses of humor.