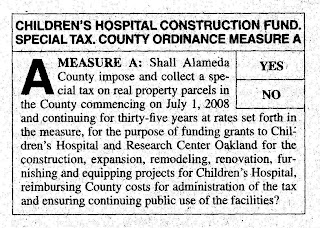 I opened up the sample ballot that I got in the mail (not that there's any point in voting, but I like to know what I'm refusing to vote on) and what was the first thing I saw? It was a big "A" staring me in the face. Everyone knows that "A" stands for only one thing in Alameda, and that's Tartan-limiting Measure Angus! Oh, that and Squirrel-limiting Measure Acorn…but that's all! We all know what is the real threat, and I am OUTRAGED that those money-grubbing, know-nothing, Council-co-opting DEVELOPERS would try to back-door the vote on the most important law there is in Alameda.

Did they think we wouldn't notice that big "A"? Do they think we're too stupid to realize that changing Tartan-limiting Measure Angus won't do anything to help children or hospitals? I, for one, like children, and I think it's absolutely DISGUSTING to use them for political purposes. I know my own adorable kids would burst into tears if they ever saw Measure "A" on the ballot. You'd like that, wouldn't you, you heartless Measure Angus opponents!

What, you may ask, could be even worse than exploiting children? Well, half of the language on the ballot is about That City That Is Definitely NOT Alameda, and they admit that the ill-gotten gains to be generated from changing Measure Angus will be going directly to That Other City, NOT Alameda!!

We all know how lucrative Bagpipes can be, but AT WHAT COST? AT WHAT COST??? I have no idea what the actual cost is, but I'm sure it's enormous. That is why every Right-Thinking Alamedan needs to show his or her outrage by BOYCOTTING this crooked election. We don't need this change, and we shouldn't even dignify the deceptively abbreviated Measure A with a vote. So don't just vote NO on February 5th; instead, make it NO VOTE!