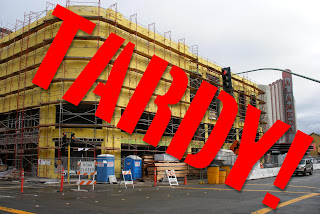 The Alameda Daily Noose and I have learned that, according to a so-called memorandum issued January 15, 2008, the spectacular and inevitable failure of the Super-Mega-Monster-Plex That Everyone Hates will be delayed by a whole two months.

The delay is supposedly due to the rain or something, but the journalistically trained eyes of the Alameda Daily Noose and me saw right through that ruse. The real reason for the delay is to deprive Right-Thinking Alamedans of two full months of complaining about the latest abomination to blight our Treasured Island!

The Mayor and her Cronies know how much we were looking forward to attending every infuriating screening held at the Super-Mega-Monster-Plex That Everyone Hates. We Right-Thinking Alamedans are willing to brave the traffic and the crowds so that we can see for ourselves what we knew all along: Nobody goes to the movies anymore, because nobody wants to brave the traffic and the crowds! The Mayor is quaking in her boots at the thought of the grumpy letters to the editor that we will write, announcing the imminent demise of the Super-Mega-Monster-Plex That Everyone Hates, so she has ordered her Cronies to delay the opening.

Let it be known that this delay will not slow us down. We will be there, along with thousands of our Right-Thinking friends and family, on the day the Super-Mega-Monster-Plex That Everyone Hates opens, tickets in hand, ready to prove that we were right about what an awful, unpopular failure it will be. Just be sure that you don't park in our spot in the new parking garage, you know, the one right by the door.