Parents, It's 5:45 AM: Do You Know Whether Your Children Are Chit-Chit-Chittering?

The Alameda Daily Noose and I were cleaning up last night after our big Memorial Day barbeque when the doorbell rang. By the time we reached the front entrance of Alameda Daily Noose World Headquarters, nobody was there, but we found this ominous little note had been slid under the door:

At first we thought it was just gibberish, but then we remembered a letter from loyal reader Frieda Bellows, in which she warned us of the danger of this thing the kids today call "tweetering." We immediately contacted our Silicon Valley technologist and entrepreneur friend who lives here in the East Bay and is a real genius with computers, and he had the Alameda Daily Noose and me tweet-tweet-tweeting away in two shakes of a lamb's tail.

The Alameda Daily Noose and I were surprised and, frankly, shocked, by what we saw: 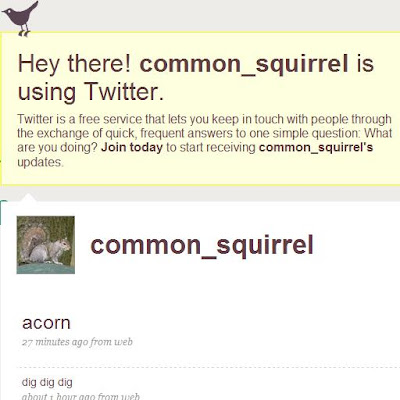 Yes, Squirrels are now using the latest in computer technology to corrupt The Children™ directly, effectively cutting Right-Thinking Alamedan parents out of the loop! By exposing kids today to Squirrels and their innermost unthinkable thoughts and twisted desires, they are subtly giving them the message that it's OK to have a bushy tail, run around on tree limbs, and dig for acorns in the lawn.

As The Children™ come to see these deviant behaviors as normal, it's only a matter of time before their little moral compasses go haywire and they announce to their tearful parents that they are running off to live with their new "friends" in the park. The only solution is to confiscate your kids' eye-phones and lap-toppers and ban them from using computers without parental supervision. They'll thank you later, when they're happily married with kids of their own, instead of living in a hole in a tree with some chit-chit-chittering Squirrel.