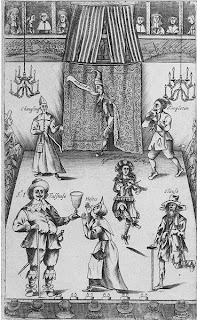 I urge everyone who is a parent, voter, or parent and voter to attend tonight's big meeting at 6:30 PM in Kofman Auditorium, located on Central Ave. in the sinister shadow of the Super-Mega-Monster-Plex That Everyone Hates. It's time for concerned parents, voters, and various combinations thereof to express their righteous OUTRAGE at the AGE-INAPPROPRIATE curriculum that is being shoved down our children's throats by those pencil-necked bureaucrats on the School Board.

I was shocked when my little girl came home from school the other day and told me that she and all of the other kids were forced to gather in the auditorium and watch as a bunch of la-di-da types in tights pranced around on a stage, engaging in what can only be described as a FARCE characterized by FLAGRANT misrepresentation of the facts! We send our kids to school to learn the Truth of Right Thinking, but it seems that everything in this so-called production was nothing more than FICTION!

I immediately called the principal to complain (I have her on speed dial), but I was told that as part of the School District's new curriculum, they are introducing concepts like THESPIANISM to our innocent, impressionable youngsters in grades K-5! I, for one, do not want any child of mine exposed to the kind of flamboyant drama that these theater types are into.

Now, don't get me wrong, I have some close friends who are thespians. I even took my entire family to a fundraiser for the Alameda Community Theater, and we all had a great time. I am NOT prejudiced against thespians, but I just don't want them anywhere near my kids when they are so young. Now, when they're older, that's a different story. We all know somebody who may have experimented with thespianism in college and yet still went on to become a Right-Thinking Alamedan.

People need to show up tonight full of SOUND and FURY over this new K-5 curriculum that uses unneeded, troubling, and confusing age-inappropriate vocabulary words like "thespian," "striplight," "teaser," "breast line," "double handling," "belaying pin," "fribble," and "gobo." Theater advocacy groups pushing this kind of curriculum benefit from the school commitments they themselves create; for them this is also their business, their income machine. Big Entertainment struts and frets around like all the world's a stage, and all of us poor parents and voters are merely being PLAYED for IDIOTS!