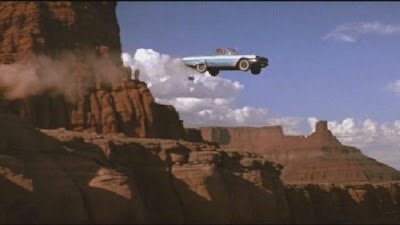 Well, the results are in, and by soundly rejecting Propositions 1A through 1E, Alameda voters have sent a clear message to those bums in Sacramento: We killed a short-sighted spending cap that would have starved the essential government services we use, and we rejected an economy-killing tax increase that would have been wasted on the bloated government services we don't use.

Just like Suzanne Somers and Bette Davis in that classic chick flick from the early nineties, Alameda voters have bravely driven the '66 Thunderbird of state off the cliff of half-hearted compromise and into the broad, inviting canyon of lower taxes. The Alameda Daily Noose and I can hardly wait for our tax rates to hit bottom!

Thanks to an early warning from the Alameda Daily Noose and me, Alameda voters craftily avoided the trap that had been set for them by Proposition 1F. Those jokers in Sacramento thought they could use reverse psychology on us, putting a measure on the ballot that practically begs people to vote for it, secure in the knowledge that we would do the only logical thing and vote against it. Well, we were so clever that we failed to see through their little non-trick, and we all voted for it, so there!

This post was restored by the author. Subsequently it was rehashed, revised and then reinstated.