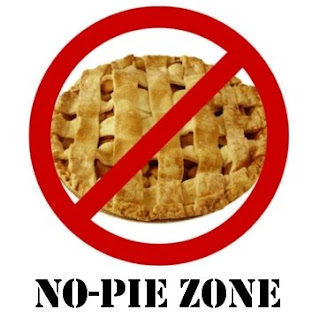 It is one thing for Former City Council Candidate to express her support of Mom and Apple Pie in a letter, and quite a different one for her to go around planting "I (heart) Mom and Apple Pie" signs in people's front lawns without asking. I know that many people support these issues without a second thought, and one might assume that there would be no need to ask whether or not I also support them, but how about a little common courtesy?

Sure, I think Mom is great, but let's not rush into rash, citywide promotion of Apple Pie. Apples by themselves are dandy, but with my diabetes, all of that added sugar and sweet pastry could kill me! Is that what Former City Council Candidate is trying to do? Is she still sore that I didn't try her sugar cookies, which I should point out were made with actual sugar?

Yes, it was dusk when she tried to sneak the sign onto my lawn, but I could see her well enough. Besides, I would know the sound of that stake-pounding hammer anywhere. Of course, as a long-time member of the City's Ennui Board, it wouldn't have been worth risking my position to actually take some action, such as going out and asking her to stop. I just want her to know that I am on to her.

With underhanded tactics like these being employed, not to mention the problems of sugar content and extra calories, Alamedans need to think twice before throwing their support behind Apple Pie.