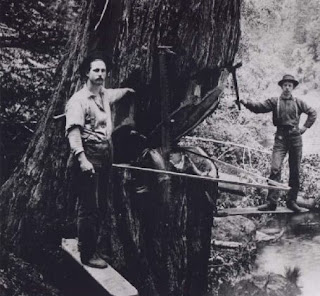 It is a sad state of affairs when our City Government holds yet another secret meeting. I only just found out about last Thursday's violation of the Brown Act. The Public Works Department met with the public behind closed doors to review the City's Master Tree Plan. Why didn't anyone notify me ahead of time? And don't bother telling me that there was an announcement in the Alameda Fish Wrap or Puppy Trainer. I never give those rags a glance, because there's nothing in them that interests me. When someone is going to make a decision about something I care about, I expect them to knock on my door, and be persistent, because I don't usually answer the door when people knock on it. Even the doorbell makes me suspicious.

And suspicious is exactly what this so-called plan is, as far as I can see. The name says it all. When the Trees are our Masters, we will all bow to the Master Tree, and that is what this plan is all about. I wasn't surprised to learn that during an earlier, also secret, meeting, "participants wrote down their concerns about trees." Now it's the job of the City to convince us that those concerns don't matter—that our fears about high Tree density are irrelevant, and that it won't cause all of the problems that we know it does. As usual, they are going to try to ram these Trees down our throats, leafy, Squirrel-harboring branches and all!

Back in the good old days, people knew how to deal with Trees, and showed them who was boss. I have fond memories of listening to my grandmother tell tales of how they used to chop down Trees to keep their pesky branches from blocking the arc lights. She always said the only good Tree is a dead Tree, chopped up and stacked next to the wood-stove for winter.

They say there are going to be more of these secret meetings, but you can be sure they won't notify me. I wouldn't go even if they did, because what is the point of airing your concerns about the Trees that are poised to take over our Treasured Island when people are just going to ignore you and plant more of the stupid things? I hope that all Right-Thinking Alamedans will boycott these meetings just like they did the huge failure of a "forum" that the City tried to force us to attend earlier this year.

I'll get off my stump now.