Alameda in the Balance: Time to Confront Greatest Threat to Our Fragile World

On Saturday, April 19, from 11 a.m. to 4 p.m., crowds will gather in Washington Park, while anyone with common sense will remain safely at home. If we are lucky, and stay away from the park in sufficient numbers, our Treasured Island's quality of life may just survive this latest threat.

The Alameda Daily Noose and I have always been suspicious of our City's annual "Earth Day" celebrations. They place undue emphasis on the so-called planet, when we know that there is no place more important than Alameda. What does it matter if we destroy the planet as long as we preserve Alameda?

Until now, we have regarded the City's promotion of this event as merely a misguided waste of time and money, but in following an investigative hunch, we have uncovered incontrovertible evidence of a far darker truth.

Yes, the pieces are all fitting into place. It is no coincidence that the so-called Master Tree Plan is underway at this very moment, or that Squirrels seem to be getting craftier, more well-educated, more in touch with earth-hugging granola fanatics, in a word: more Squirrely. You've noticed it too, haven't you?

The reason for it was there all along, staring us in the face. The City thought we wouldn't be clever enough to see it, but we saw it all right. It's no use their saying now that out-of-control tree density will have no significant impact on Squirrel overpopulation, because it is clear now that the City is actively distributing pro-Squirrel propaganda via its media lapdog, the Alameda Puppy Trainer "newspaper"!

The advertisement features a sneering Bushy-Tailed Terrorist holding the globe in the iron grip of its blood-soaked claws, with Alameda clearly visible in its rightful place at the center of the world. Here is our highly disturbing Alameda Daily Noose exclusive scan of this vile piece of pro-Squirrel propaganda, complete with our insightful editorial commentary: 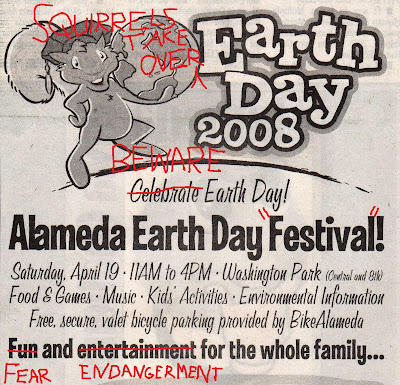