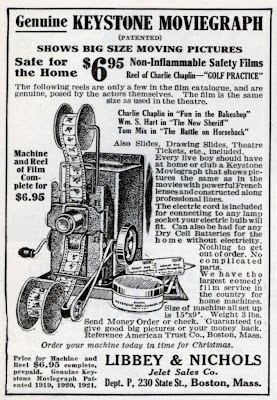 Supposedly, the Evil Developer of the Super-Mega-Monster-Plex That Everyone Hates has promised that "state of the art" equipment will go into the Theater. Well now is the time to check if that is happening.

I am OUTRAGED to report that my sources say "NOPE!" - that's a big NO to digital laser projection, hell considering who is responsible for the spending and what happened at the last Alameda Theater he managed, we would be lucky to get 70mm projectors. Well, I'm told that ain't gonna happen either. I'm told the Evil Developer is putting in 35mm projectors! Could these be the same ones he pulled out of the South Shore Twin Theaters he operated? Or, more likely, will they be nothing other than the "Genuine KEYSTONE MOVIEGRAPH" projectors shown in the ad above?

I'm sure that the first movie will be the Reel of Charlie Chaplin's "GOLF PRACTICE" that came with the projector. After that we will see the famous William S. Hart in "The New Sheriff", and last but not least, who could forget Tom Mix in "The Battle on Horseback"? Makes me wonder where the popcorn will be from. Freshly popped? - At some time before he buys it "preseasoned" at Costco? That kind of third-rate entertainment does not impress me.

So I ask you, Rog, have you or anyone else been able to ascertain the truth of what the Evil Developer is installing in his theaters as far as the promised "state of the art equipment"? Anybody have the connections to provide an inventory of the "state of the art" equipment he is installing? I would hate it if the 'thunderous roar' in the Charlie Chaplin special-effects blockbuster "Fun in the Bakeshop" is just another one of those "Non-inflammable Safety Films" clacking its way through the hand-cranked mechanism of the "Genuine KEYSTONE MOVIEGRAPH".

Yours in Genuine OUTRAGE,
Donald Kirkland

Jeez clown - so many questions, yet you only have as many answers as you have responses to most of the childish bullshit you waste your time on. Yep -ZERO, you silly goose egg! You must have a heavily perverted sense of hate for ADR. You should be, and likely are, pitied. I suggest you see a professional to get thy self on heavy meds. (yes the “thy” is to appease your obvious megalomania, but don’t just take my word for it- see a professional, really. Even you, should be able to step out of your diaper mentality.) Until then why don't you talk to your friends - no not your neighbor's dog – he ALWAYS gives you bad advice, try the other dogs at your theater project, and get some real answers while you wait until your HMO can "fix" you.