Scottish Propaganda in the Aisles! 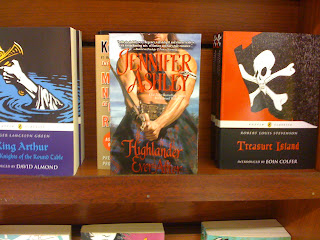 I had an urgent need for some hardtack and since the Dusty Shelves Market is closed on Sundays, I went to the Lucky grocery in Marina Village, which I find to be of a more manageable size than that infernal Safeway, even though it's near the tube that brings strangers on to our island to park in front of our houses. As I was standing in line, I was shocked to see a novel entitled HIGHLANDER EVER AFTER - right in the midst of a display of children's books, where any unsuspecting young Alamedan could see it!

Naturally, as a Right Thinking Alamedan, I had to document this outrage, which I have done in the attached photo. Determined to see what kind of propaganda was being directed at our children, I looked on the interwebs and found that the book is about a princess from the fictional land of Nvengaria who is sent to the all-too-real country of Scotland by her (obviously insane) father, allegedly for safekeeping. There, the princess finds refuge with one Egan MacDonald, "the most honorable, infuriating, and deliciously handsome man she'd ever met."

Unlike the books of seventh-generation Alamedan Danielle MacSteele, HIGHLANDER EVER AFTER is dangerously pro-Scottish, and thus an obvious attempt to sway a future generation of voters away from Tartan-limiting Measure Angus. I urge all Alamedans to boycott this market until they remove this propaganda from its shelves! Oh, Dusty Shelves Market! Why couldn't I have waited?

The shocking, tasteless image on the cover of this book is, in itself, enough to raise the ire of Right-Thinking Alamedans. Anyone who would knowingly display such a picture in a place where innocent children, and even innocent adults, might see it, doesn't deserve to do business in Alameda. That is why the Alameda Daily Noose and I pledge our full support to Miss D'artanjello's boycott.

I was born and raised in Alameda. I have to confess- I have never heard of this place called "Scotland". They didn't teach us about it in the schools here. Where can I find more about this place? Is it anywhere near Oakland?