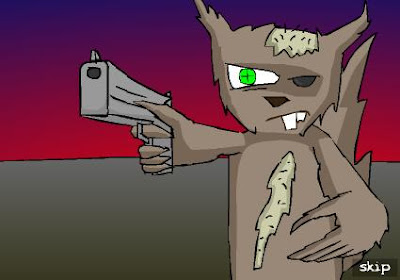 Thank you for having the courage to publish the truth about the City's so-called "Master Tree Plan," the truth your readers are never going to hear from the Squirrel-coddling mainstream news media. Kudos to you!

I thought you and your readers should know that I just returned from the 2008 Backyard Soldier of Fortune Convention and Exposition held at the Sands Hotel and Casino in Las Vegas, and I am excited to report that I learned a number of techniques that every Right-Thinking Alamedan will need in the escalating Global War on Squirrels.

In addition to the usual catapults, flame throwers, and stainless steel Ruger 10/22s with Volquartsen heavy barrels and gas stabilizers, this year's convention featured an exciting new technological development, the Sciurine Combat And Tactical Simulator, or S.C.A.T.S. This advanced computer program, once accessible only to those with supercomputers in their basement bunkers, is now available in a format suitable for distribution on the Interweb. I have attached a copy above that your readers can use to begin their training.

I realize that some of you namby-pamby, latte-sipping, bicycle-riding, Birkenstock-clad, lily-livered liberals out there might wring your hands over the level of violence depicted in the hyper-realistic S.C.A.T.S. program. Listen, before you strain your limp wrists trying to pick up the phone and call the S.P.C.A., you would do well to remember the official slogan of the Backyard Soldier of Fortune: