Editor's Comment:
It's lucky for Dave Williamson that the Alameda Daily Noose and I can take care of the shop while he's busy working on Miss Grumpy Alameda's publicity for her upcoming pageant. Sometimes it takes a seasoned veteran to really do the Noose job right. We are sure that our loyal readers will appreciate the hard-hitting story below, brought to you by yours truly, Roger Grumbel, and the Alameda Daily Noose.

The Alameda Daily Noose and I have observed that some innovative dishes are being served at that new, chic restaurant on Encinal Avenue. One of those dishes is apparently called the "R.I.P.," which we've discovered stands for "Rest in Peace." That must be because your mind will be at peace after you've eaten it, knowing that it's a healthy alternative to the kind of heart-attack on a plate your doctor keeps warning you about. In fact, they do away with the plate altogether by serving the "R.I.P." in a little paper sleeve instead. You can get it either grilled, or cooked in a most original manner. A banner outside the restaurant graciously invites you to "et" (a charmingly old-fashioned word for "eat") a "R.I.P." 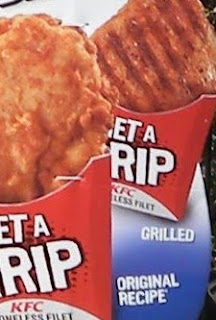 Recently, we noticed that the restaurant is also serving something called the "Double Over," in a clear attempt to appeal to the carbohydrate-conscious consumer. Those fattening pieces of bread that ordinarily go into a sandwich have been replaced with melted cheese and bacon. This puts it over and above an ordinary sandwich in health terms, making it at least twice as good for you, which explains the name "Double Over." 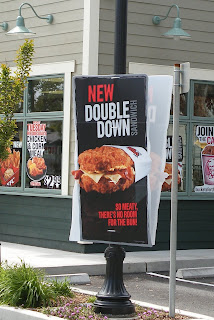 With offerings like these, that new restaurant might almost start to fit in with Alameda stand-bys like Gym's Coffee Clutch and Ole's Gruel and Hardtack Hovel, although nothing will ever be able to compete with the Fischer Schnitzel at the Rusty Scupper. Still, the Alameda Daily Noose and I have half a mind to drive over to that new restaurant and down a "Double Over" or two just to see if the place might be a worthwhile addition to Alameda's healthy restaurant scene after all.