You won't believe what I saw in the newspaper! Not that I ever read newspapers, or get news from any print source other than the Alameda Daily Noose, but I needed some packing material for a package I was sending to my cousin on Bay Farm Island, and this gruesome image caught my eye: 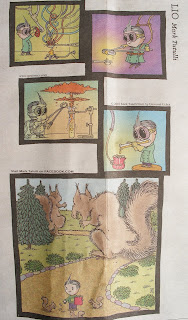 Yes, that's right; it is nothing less than a visual instruction manual, drawn by some troublemaker named Mark Tutulli, showing children how to turn Squirrels into even larger, more dangerous threats to our quality of life! If you take a closer look, you'll see that I'm not exaggerating. 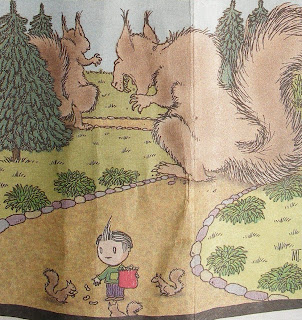 As if those vicious, fluffy-tailed killers weren't already bad enough, soon we're going to be dodging ones as tall as that Imperial library they built where the perfectly good motel used to be. It is appalling that any publication would be allowed to spread such blatant propaganda to corrupt our youth and terrorize our seniors, who are at extra risk from Squirrel-related heart attacks.

Whoever this Mark Tutulli guy is, he is obviously also a proponent of trees, and may be behind our gigantic acorn problem. No wonder we are having so much trouble with Squirrels in Alameda! This cartoonist must be stopped.

Editor's Comments:
Editor-in-Chief Dave Williamson is still too occupied with promoting Miss Grumpy Alameda to assist in circulating Noose items such as this one about the escalating Squirrel threat. Even though our lives are all in danger, he thinks it's more important to prepare for the Miss Grumpy California pageant. It's lucky for him that the Alameda Daily Noose is in the capable hands of its original editor during this time of need.