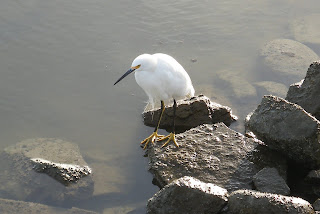 We at the Inaction Alameda Alameda Daily Noose think that Roger Grumbel deserves a hand for doing an okay job of editing last week, even though he must have been a little rusty from months of retirement. We have to admit that he used to do good work, in fact even ground-breaking work judging from the way that so many other online "news" sources seem to be trying to catch up with him these days, especially in the realm of stories about Alameda's bird population.

In recent weeks, other, more slow-moving reporters have been following in the footsteps of the Inaction Alameda Alameda Daily Noose with their investigations on birds. We are glad to see that they are finally starting to understand the importance of such stories, even though it took them years to catch up to us on the subject of egrets, and even longer to pick up on the truth about terns.

Naturally, the Inaction Alameda Alameda Daily Noose has long been on the cutting edge of tern coverage and egret updates. Although no-one else does it as well as we do, at least they are now trying. It shouldn't take a very sophisticated observer to see just how seriously these stories deserve to be taken.