According to preliminary reports on contenders for the Miss Grumpy California contest, Miss Grumpy Alameda could get a run for her money from up-and-coming grump Miss Grumpy San Francisco. 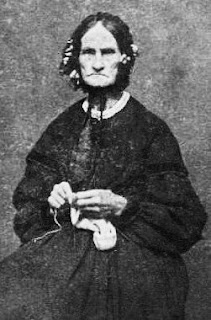 Miss Grumpy S.F. (seen here picking at the arguments of those who disagree with her, in an attempt to unravel them) has an unfair advantage over her Alameda counterpart because there is so much more to complain about in San Francisco. As impossible as the traffic and parking situation is here in Alameda, it is even worse in San Francisco. Drivers in San Francisco may sit in their cars for hours, yet they can't sit on a public sidewalk. Next they'll be prohibiting people from so much as dropping their gum on the sidewalks! Furthermore, buildings in San Francisco have apparently gotten so tall that startled birds are smacking into them and dying by the flock. Miss Grumpy S.F. has plenty of material on which to hone her grumpy letter-to-the-editor skills.

It looks like Miss Grumpy Alameda will have to work overtime to keep an edge over her rival from across the bay, and will need even more assistance from her trusty publicist as she heads towards the state competition. That means that loyal readers of the Inaction Alameda Alameda Daily Noose will unfortunately have to put up with the well-meaning efforts of former editor Roger Grumbel more often. It's a small price to pay to ensure Alameda's preeminence in the world of Grump.