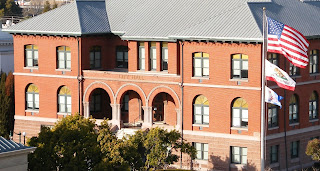 With the California title in her sights, Miss Grumpy Alameda is training hard. Those who wish to cheer her on can witness her freestyle grumping sessions on most days at Gym's Coffee Clutch, where she usually starts her day with a warm-up rant to anyone who will listen, and then proceeds to more complex forms of complaining.

As part of her training, Miss Grumpy Alameda has been composing headlines of the sort that might be suitable for stories in the Inaction Alameda Alameda Daily Noose by Inaction Alameda. Classics such as "What Are They Thinking?" or "Somebody's Trying to Change Something, and I Don't Like It!" could easily be adapted to a number of different Noose stories that might develop in the future.

We know it will improve Miss Grumpy Alameda's chances in the statewide competition when she can say that she has literally been making headlines, almost on a daily basis. That's the kind of thing that judges look for.

Also, in observation of the official U.S. census date today, Miss Grumpy Alameda will be complaining loudly about the amount of paperwork citizens are expected to fill out for the census. In the process, she may include criticism of the way in which Alamedans are counted, which is the same as the way everyone outside Alameda is counted, even though we pay more in taxes than they do. Alamedans should probably count double, at least. This particular rant is scheduled for 1:00 p.m. today, on the steps of City Hall, which may provide further fodder for her complaining. An Inaction Alameda Alameda Daily Noose reporter will be there to cover the event, which is expected to draw at least 100 people.