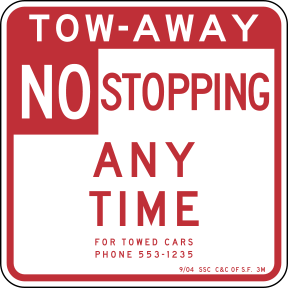 Dear Roger,
(I heard that you would be filling in for Dave Williamson again soon, so I'm sending this letter directly to you. I know it will be safe in your editorial hands.)

I am seething mad right now, because just the other day, my car got towed! I mean, sure, there was a big sign saying, "No parking, violators will be towed," but the sign didn't say when the towing would occur, so I figured I could get away with parking there for just a teensy minute or two. Besides, we all know that no-one ever actually usually enforces those no-parking zones.

So you can imagine my surprise when I came back to find my car missing! Naturally, I assumed it had been stolen. I rushed into a nearby business with a view of the tow-away zone, and breathlessly asked the employees if they had seen anything. I couldn't believe it when they said a tow-truck had removed a vehicle from that tow-away zone not more than half an hour before. the employees helped me figure out how to get the car back, but not one of them showed an ounce of the outrage that they should have felt on my behalf. After all, I had to park in that tow-away zone, because it was the closest place where there wasn't already a car parked. And then the towing company expected me to pay to get my car back, on top of the inconvenience of having to go and pick it up.

Why can't other people understand that the rules don't apply to me? I'm a good, responsible driver. When I speed it's because I'm actually in a hurry, unlike those yahoos who zip recklessly around town for no good reason, getting in my way when I'm trying to drive through an intersection efficiently. If they would just obey the law, it would be a lot easier for me to get around. And if this city would just get with the program, they would replace all of those useless tow-away zones with unlimited free parking, and make sure that all parking spaces are right in front of the places that people want to go to.

Is that so much to ask?