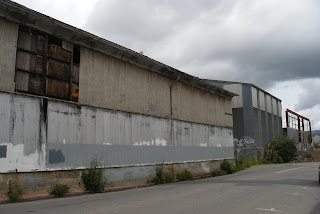 Now, I'm not opposed to plans for redevelopment in general, but this particular plan is all wrong for the mixed commercial/industrial/residential character of the neighborhood. For one thing, those buildings were once three stories tall, so restoring them would ruin the views on that street. In order for any redevelopment plan for this site to be acceptable, it would have to create no additional traffic, and not change the appearance of the property in any way. Change is bad. We ned to preserve the restful view of rusted beams and boarded-up windows for future generations.

And don't even get me started on those people who suggest putting some other kind of building there instead. Surely, no-one could take that idea seriously.

Editor's Comments:
Miss Meadhall certainly seems to have a good grasp of what makes Alameda a nice place to live. She is right that change is bad. Now, if only certain slip-shod young noosepaper editors could keep that in mind, maybe we could all have confidence in the future of our island city.