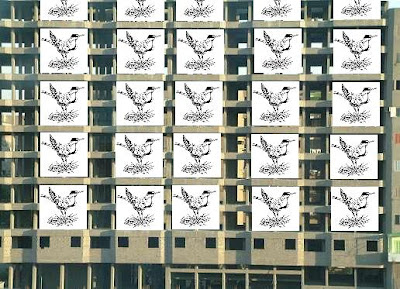 How can citizens just stand by while the developers of Alameda Point are planning to exploit the Least Tern Density Bonus to turn our island into a nightmare of San Francisco style high-rise wildlife preservation? Would YOU want to live next door to a 200-unit subsidized Tern nesting facility? Think of the noise! And no parked car would be safe in that neighborhood, unless you could afford the astronomical car-washing bills. Some of us love our families too much to spend that much money cleaning Least Tern leavings off of our cars.

There is already more Tern traffic in Alameda than anywhere else in the Bay Area. Enough is enough! If people want to provide living space for Least Terns at the Point, they can build single, or at most, double nesting spots, but stacking Terns on top of each other is inhumane both for the Terns and for us! I am OUTRAGED that anyone would even imagine suggesting that we sacrifice our way of life to satisfy the avian accomodation industry, colloquially known as "Big Bird."

They say birds of a feather flock together…but let them do it somewhere else!

Yours in Outrage,
Donald Kirkland