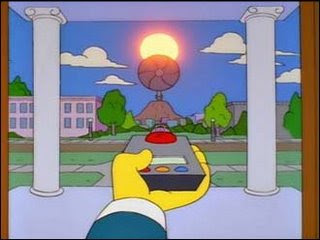 Recently I became aware of a Sinister Plan being promoted by Alameda Power & Telecom to create yet another useless City Board and/or Commission called the "Solar Panel," which would erect an Infernal Machine to blot out the sun and then charge our homeowners outrageous rates for electricity to light our domiciles, to say nothing of cable television and interweb videos to watch during those long days of permanent darkness. In fact, the foundation for the Sun-Blotting Device to be controlled by the "Solar Panel" is already in place, ingeniously disguised as a combination parking garage and Zeppelin port. How do I know this? I know this because I read about it in an objective and soon-to-be-award-winning daily noosepaper – not in one of those local fish wraps and dog trainers run by interlopers with preset convictions – and no history of life in our great city. So, without further adieu:

1. I urge you, My Sweet, Tender, Elected Officials, not to open the so-called "Pandora's Box" by approving the creation of this "Solar Panel." Once the "Pandora's Box" is opened, it's very difficult to get "Pandora" back inside. And as I mentioned earlier, the foundation of the Sun-Blotting Device is already in place, which leaves only the opening of the so-called "Box" between us and Certain Doom. Do we want a bunch of non-elected Pencil-Necked Bureaucrats controlling our Sun? Hardly! Read on.

2. Some have alleged that my concern over the "Solar Panel" has become a personal Crusade, my "so-called goal in life." What blundering idiots! My goal(s) in my life, after treading this planet for nearly as many years as there are words in one of my shorter Grumpy Letters to the Editor, surely have been/are/undoubtedly shall remain greater in magnitude than that which you would otherwise assume.

3. My verified career accomplishments – intramural, interpersonal and interdepartmental are manifold – I have eaten Squirrels for breakfast, I have defended Grand St. against none other than John…Knox…White, I have been to the Gates of Hell and back and I have even been to Oakland.

4. My unverified career accomplishments – interstate, international and intergalactic, including defeating a horde of bagpiping "Measure Angus" opponents with one hand tied behind my back and no earplugs, traveling as a Soldier of Fortune to war-torn lands and Parking in Front of the Houses of Infamous Dictators and negotiating a peace treaty with an army of hostile alien invaders will attest to the fact that my energies have been/are/always will be devoted to protecting Truth, Justice and the Alamedan Way – not abusing them.

5. Wait, what was I talking about again?

6. Oh right, the "Solar Panel." Let me add, I did not seek publicity on my efforts and success. Well, other than the multiple Grumpy Letters to the Editor I wrote to one fair and balanced and soon-to-be-award-winning daily noosepaper. Oh, and other than that one front-page story in the Alameda Puppy Trainer. To this day, few know of my efforts other than the Alameda Daily Noose and Rog. Accordingly, I shall not seek, and I will not accept, the honors and accolades you undoubtedly wish to bestow upon me.

8. Well, OK, maybe if you really grovel and put your heart into it.

I for one, am on bended knee, pleading with the honorable Milhouse to accept the glorious honors that all members of the island nation that is Alameda want to bestow.

I humbly offer my tiny abode, my shack if you will, for this truly wonderful event.