Measure Angus Champion to Take On All Comers Tonight 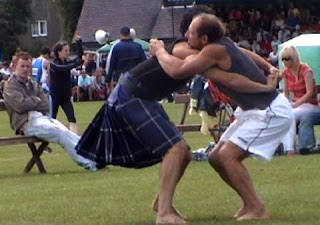 On Thursday, November 8, at 7 p.m., concerned Alamedan Dave Williamson will pull on his rhetorical gloves for a debate to end all debates on Alameda's Tartan-limiting Measure Angus. Mr. Williamson will, of course, be arguing in favor of Measure Angus. No-one in particular has been invited to argue the other side, but there is generally a rowdy group of auburn-haired, kilted proponents of runaway Tartan density who show up to such events.

The winner of tonight's rumble, which all Right-Thinking Alamedans already know will be Mr. Williamson, will walk away with a $10,000 purse or "sporran," as it is called by those who hate Alameda as much as they love Bagpipes. So get ready for the match of the millennium as Mr. Williamson defeats them all in a rock-'em, sock-'em, perfectly fair and completely balanced and civilized debate.

For those readers who aren't from Alameda, Measure Angus, colloquially known as "Measure Angus," is some legal dingus in the City of Alameda that saves us all from the horror of Bagpipe music, makes it safe for us to walk our dogs at night, and is the only reason we all bought houses here in the first place. For more information, attend the debate at Alameda Central Gathering Place. All cabers must be checked at the door.