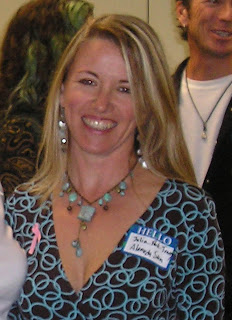 On Friday, October 26, the Alameda Daily Noose and I recieved a very important press release marked "Embargoed until Nov. 1." Naturally, we were tempted to read it and publish it early, say, on Monday, October 29, caught up in the excitement like a four-year-old the night before Christmas; however, as a Noose Man in the Classic Sense I was honor-bound to put the press release in a Very Safe Place until November 1.

Unfortunately, it seems that somehow the Alameda Daily Noose and I managed to use the press release to wrap a delicious halibut we bought at that hippie grocery store. By the time we got around to frying up that fish, we weren't able to make out all that much of the press release, but as far as we can tell, some lady named Tracey, who comes from the Julia Park neighborhood of Santa Rosa, has been chosen as the new publisher and executive editor of the Alameda Puppy Trainer "newspaper."

Normally, the Alameda Daily Noose and I wouldn't trust anyone who is not from Alameda, but Tracey said something nice about us, so she must be different from most outsiders. Maybe she can teach a thing or two to those hacks at the Puppy Trainer, especially if she pays close attention to the level of journalistic integrity embodied in the Alameda Daily Noose and me. We just hope that after that long commute from Santa Rosa, she is not tempted to park in front our house. Good luck, Tracey!

"History repeats itself, first as tragedy, second as farce."