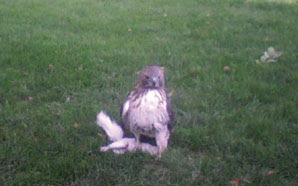 Last week, the Alameda Daily Noose and I had the honor of receiving yet another gee-mail message from none other than Marc Albert of Tijuana Brass Band fame:

Perhaps all the local peaceniks can be pushed aside. What we need to save Alameda is a real hawk for our War on Squirrels

Apparently, an entire college campus somewhere in Ohio, which the Alameda Daily Noose and I understand is a Midwestern state famous for its potatoes, was being terrorized by a Squirrel that, no doubt due to exposure to gamma radiation in one of the institution's research labs, had mutated into some kind of hideous genetic freak. Thankfully, the beast's reign of terror was cut short by a true avian hero, an ordinary hawk that somehow managed to fell the monster, as shown in the exclusive Alameda Daily Noose photo above. Immediately after the incident, there was a great outpouring of support from the student body, as documented on one of those so-called My-Face pages on the interwebs that the kids today are so fond of.

On behalf of our grateful readers the Alameda Daily Noose and I thank you, Mr. Albert, for taking time out from your illustrious musical career to inform us of this great victory in the Global War on Squirrels.