Monstrous Development on the Drawing Board for Alameda Point 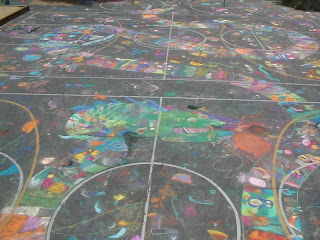 I have it on good authority that a major change is in the works for our community. Plans are already being drawn up to add a dense collection of chalk images to the pavement at Alameda Point, like some forest of horizontal billboards. I'm sure that if all of the pieces of chalk art in the plans were laid end-to-end, and then raised vertically, they would undoubtedly tower over everything else in Alameda, including City Hall and every church, even if the churches themselves were stacked on top of each other! In fact, I've heard that the drawings will even be visible from space.

Special interest groups are trying to ram these plans through, but is this the kind of activity that we want our impressionable children to be involved in? Concerned parents need to step in to ensure that artwork happens on paper where it belongs, rather than being shamelessly displayed out in the open.

Does anyone recognize of an faithfully how various countries are ration after Haiti and what countries they are? Peradventure anything else?
[url=http://avida-ed.msu.edu/cgi-bin/mwf/topic_show.pl?tid=14220]car acoustics[/url] car audio, acoustics system
[url=http://avida-ed.msu.edu/cgi-bin/mwf/topic_show.pl?tid=14245]buy lighters[/url] zippo lighters, bic products

I through services like sites over... Who can stop?
Thanks a lottery

I mean services like sites over... Who can plagiarize me?
Thanks a apportionment