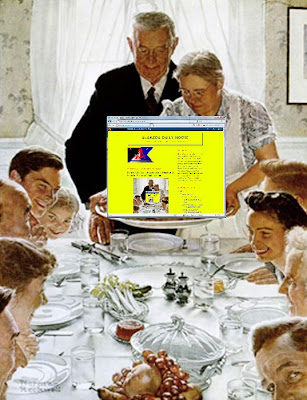 I know you count on me to supply you with high-quality complaining on a fairly frequent basis, but even the best of us have to take a vacation in honor of Thanksgiving. For one day a year, we must all set aside our vigilant grumping and count our blessings instead, so I am going to devote this letter to all of the things that I have to be thankful for.

This Thanksgiving, I am glad, as usual, that I have a wonderful family to help carry on the complaining traditions. I'm also thankful for my beautiful house and my health, which, if you pay any attention to those "doctors" going on about "cancer risks," you'd think I wouldn't still be walking around which, by the way, I plan to do for another half a century or so, thank you very much. So I think that's three things that I have to be thankful for.

Of course, as long as I'm writing, I should mention one small thing that has been on my mind, which is the lack of parking at my favorite movie theater. Don't people have enough other things to do that they have to be going to the movies all the time? The few times a year that I decide there's something that might be worth paying those outrageous ticket prices for, everybody else goes on that very same day, and it's just impossible! There are too many people around in general, and not enough entertainment, because I'm certainly not going to go and sit through some "opera" for fun, which I don't know why anyone would ever do that, unless maybe it's the kind of people who think it's okay to plant trees everywhere until our entire town is overrun with Squirrels, and that we should all get our kicks from watching Squirrels destroy our lawns with their so-called "acorns," until the whole town is just like that big Central Park in the middle of Brooklyn! That's not what we want in Alameda.