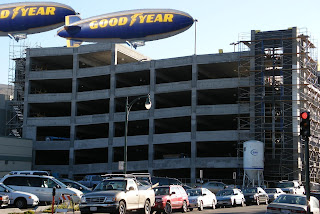 Once again, the Alameda Daily Noose and I have scooped all of the other major news media with our exclusive Pulitzer-prize-eligible Alameda Daily Noose photo (above) of Sunday evening's test of the new Zeppelin mooring masts that were recently installed atop the Super-Mega-Monster-Plex That Everyone Hates. When fully operational, the facility will be able to accommodate up to six of the giant airships at one time, according to City propaganda.

The mooring masts are part of the latest trend in "Zeppelin-Oriented Development," or Z.O.D., which is all the rage among the so-called planning experts who regularly gather to plot the destruction of our cherished way of life. This unwelcome development in the already unsightly project is clearly the work of none other than our arch-nemesis, John…Knox…White and his diabolical Transit Panel. John…Knox…White's dastardly scheme is to force people out of their cars and into Zeppelins, thus turning our Treasured Island into this: 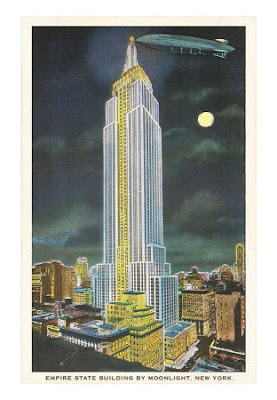 Doesn't that Manhattanite John…Knox…White know that unlike New Yorkers, Alamedans love their cars, and will never tolerate big, ponderous gas-bags drifting around town, all puffed up with seemingly inexhaustible quantities of hot air?