We warned you. But did anyone listen? Time and again, the Alameda Daily Noose sounded the alarm that fishy things were afoot at the Alameda Library, as they first stocked books written by people who don't even live here, and then expanded their already inappropriate collection to include smut.
But now, there is no denying that all of those ominous signs were pointing to the same thing...our city, including the public library, is under the thumb of the Evil Empire. 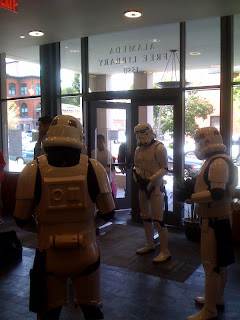 Yes, all of those mysterious meeting that the City Council held behind closed doors must have been meetings with none other than the Evil Emperor. For all those years, they tried to make us believe that the outrageous size of the new library was necessary to hold all of the "books" and spaces for "students" to do "homework," while in truth they were building it to conceal the massive death ray that we can only conclude is aimed straight at the heart of Alameda.
Of course, if the library's death ray were fully operational, they would already have used it against us. That means there is still time! If every Right-Thinking Alamedan refuses to pay any overdue book fines, we will cut off the funding for their secret project. And while we stage our noble rebellion, be sure not to check out any additional materials, or indeed to set foot in the not-so-free library for any reason, because as you can see, they will be waiting for you.