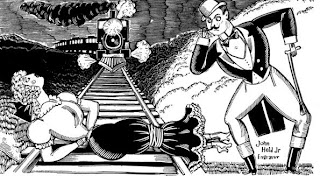 Last week we received an e-mail from Alameda mayoral candidate Anthony Daysog, in which he shamelessly ducked a series of perfectly fair questions about the $659/year (residential) parcel tax recently approved by the Alameda Unified School District.

These perfectly fair questions were apparently posed by a cub reporter for some second-string news outlet we've never heard of. Although we admire his pluck... it's pretty clear that he needs a bit more practice at posing questions in a fair and balanced manner that is sure to elicit a response....

For example, instead of asking this...

Knowing that the redevelopment association is keeping money from the schools, do you endorse the parcel tax?

It would have been much more perfectly fair to ask....

Knowing that the cold-hearted cabal at the quote-unquote redevelopment association is twirling its collective mustache and laughing diabolically as it prepares to tie our sweet, innocent children to the railroad tracks of underfunding, all the time with the locomotive of fiscal catastrophe bearing down upon them, do you nevertheless still pig-headedly insist on endorsing this travesty of a farce of a charade of a so-called parcel tax?

Normally, we wouldn't embarrass a potential fellow journalist by exposing such substandard work to public criticism, but we believe it would be instructive for our readers to compare such a well-meaning but underdeveloped piece to the impeccable work that we turn out every day here at the Inaction Alameda Alameda Daily Noose by Inaction Alameda. For all of those aspiring reporters out there, we'll give you ten extra credit points if you can correct all of the stylistic and content shortcomings of the full list of questions that we received, and mail your revisions to us at: alamedadailynoose@gmail.com
Here is the e-mail we received.

Yes, I endorse the upcoming parcel tax measure
wholeheartedly. Our schools need the funding
because of the dramatic cuts made by Sacramento
legislators.

The fact of the matter is that when prospective
residents and/or businesses look for places to
locate, the first question on their mind is, "How
good are the schools?" So, we need the best
possible school district if we hope to be the
progressive, world-class city we are striving to
be.

So, yes, I wholeheartedly endorse the parcel tax.
Thanks for asking. All the best.

From: David Howard
Subject: Media Inquiry:Will you endorse AUSD Parcel
Tax?
To: Frank at Frank for Mayor,
D Linney at Next Generation, Tony Daysog,
M Gilmore at Ci Alameda CA US
Cc: Mowster
Date: Wednesday, March 17, 2010, 1:59 AM
On behalf of Action Alameda News... note that I
also write occaisionally for Examiner.com on
Alameda County issues, so I might write about this
there as well, your response, or non-response as
the case may be....

This message is being sent to the three self-
declared Alameda Mayoral candidates, Frank
Matarrese, Marie Gilmore and Tony Daysog....

As you well know by now, earlier this week AUSD
passed a replacement tax, representing a 114%
increase in the combined amount of Measures A and H
for residential property owners. ($659/yr v.
$309/year)

My questions for each of you, are, given the
following:


All of you have generally been supportive of the
redevelopment/tax increment financing mechanism in
Alameda, most uniformly around the Alameda
Cineplex/theater/Parking Garage.

Frank, on SunCal's Measure B, you raised the issue
of State taking away redevelopment money as being a
financial problem for SunCal's proposed development
plan for Alameda Point.

Tony, you lent your name to the PtP endorser's
list.

Marie, you (belatedly) spoke out against Measure B.

Given this, do you support the Redevelopment's
association lawsuit to block the re-allocation of
local redevelopment funds for schools?

Knowing that the redevelopment association is
keeping money from the schools, do you endorse the
parcel tax?


2) In a recent article, Dennis Green spoke about
the "de facto segregation" of Alameda schools -
largely White and Asian populations in East End,
Bay Farm and Gold Coast elementary schools, and
more "diversity" in the West-end schools, like
Paden, Franklin, and Ruby Bridges. The publicly
available enrollment data backs this up:
http://www.action-alameda-news.com/ausd-enrollment-
demographics/

AUSD's master plan, approved on Feb 23rd,
acknowledges the achievement gap between African-
American / Hispanic and White / Asian students and
talks about "Plan A" needing a parcel tax. However,
the parcel tax ballot language makes no committent
to allocate funds to address that gap. Indeed, the
ballot language approved earlier this week doesn't
mention the achievement gap at all.

Given this, do you plan to endorse the parcel tax
as written, with no allocation specifically for
addressing the documented achievement gap?

Do you think a parcel tax should such as that
approved by the AUSD Board earlier this week set
aside funds to address this achievement gap?


Please respond by close of business this Friday,
March 19th, if you can. Or let me know when you can
respond. All responses in writing, please.