I read with disgust the anti-doughnut editorial disguised as a story in your Thursday edition. It's the same thing every time: some malcontent pulls a doughnut on a merchant, and suddenly you lilly-livered liberals are wringing your hands about the need for draconian doughnut control laws. Consider this, though: If dougnuts are outlawed, only outlaws will have dougnuts. Maybe that unruly customer would have thought twice about pulling his Bavarian cream if he knew the store owner was packing a loaded Danish for protection.

At the first sign of trouble, you bleeding hearts run and hide behind the skirt of the nanny state, crying, "Wah, Mommy, Mommy! There ought to be a law!" Well, you know what? We don't need more stinkin' laws; what we need is more good old-fashioned personal responsibility. After all, doughnuts don't shoot custard at people, people shoot custard at people.

Not only do your editorial opinions need adjusting, but you also can't get your facts straight. It was obvious from the drivel you published on Friday that you people in the hybrid-driving, latte-sipping world of the liberal media elite don't know anything about the U.S. military or national defense. Anyone who could think for one moment that the U.S. Army Special Forces Command is made up of a bunch of limp-wristed Gallic environmentalists clearly wouldn't know a commando from a cruller! In the wrong situation, confusing one of those for the other could be a deadly mistake. As anyone in the Armed Forces can tell you, doughnuts have a long history of military applications: 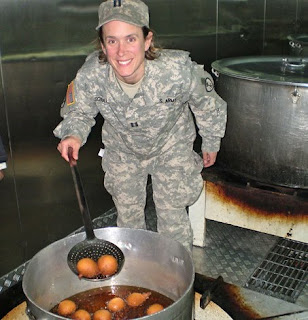 Indeed, our Founding Fathers, keenly aware of the threat posed by oppressive British pastries, enshrined in the U.S. Constitution the fundamental right of citizens to do whatever it takes defend themselves, their homes, their families, and their country:

A well regulated Bakery being necessary to the security of a free State, the right of the people to keep and bear Dough-Nuts shall not be infringed.

So, go right ahead with your doughnut ban crusade, Mr. Williamson. You can have my doughnuts…when you pry them from my cold, dead hands!

[Editor note - These doughnut nuts are dishonorable and dishonest. These aren't people the rest of Alameda can work with – they will say anything to push their pro-pastry agenda. Anyone who's been around can see that their arguments are full of holes. But free speech is good.]

We will do your construction cleanup.

wait. No "by gum"? No "when me and my buddies fought our way up Pork Chop Hill"? For shame.