Yet Another Reader Just Doesn't Get It 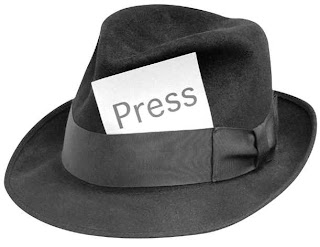 What's up with the great big headline on yesterday's story? I could read it from across the room, without my glasses.

Ever since you took over the Alameda Daily Noose from Roger Grumbel, it seems like it's been getting less like a noosepaper, and more like some kind of tabloid, with the garish colors, the big ads, and the unfounded conspiracy theories.

Roger always had some kind of basis for his wild conspiracy theories. It was easy to see what made him a nooseman in the classic sense, but what are your press credentials? How do we know you're not just pretending to be a journalist and making up all of these weird stories?

[Editor note - It's called investigative reporting. Of course, anonymous cowards like "Dubious Reader," like the rest of the benighted people in this town, wouldn't recognize real journalism if it bit them on the Asahi Shimbun. First of all, big stories' demand big headlines. We've been told that that is the first thing you learn in journalism school. As for the color, we understand that some rag called the San Francisco Chronicle just recently started using color. We're glad to see that they've caught up with us. We're sorry if our advertising offends your delicate sensibilities; I guess you just didn't realize that we're merely following the example of world-famous publications like The Economist and the Wall Street Journal, which also rely on tasteful and informative advertising, just like us. All of you so-called readers need to wake up and see that we are the only source of investigative journalism that has ever existed in the island city of Alameda, at least in living memory.]