Are We Great? Do Investigative Bears Report in the Journalistic Woods? 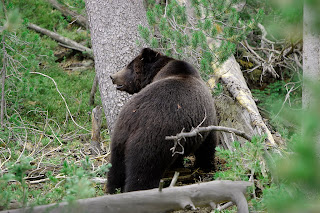 I was really offended that you characterized the second-rate news reporter who is challenging our mayoral candidates as a bungling "cub reporter."

It is clear to me that this reporter is no cub, but is instead a full-grown grizzly bear, intrepidly uncovering the many slugs that lie beneath the rotten stumps in this town.

Why am I so sure? Because:

2) He has background sources. Have you ever noticed how often this investigative journalist says stuff like, "some say the fix was already in" or "some say this reflects on his character?" Journalists for the Totally Co-Opted Mainstream Newspapers say things like, "A highly placed official who wasn't willing to speak on the record said..." But why waste words? Just say "some say." Sounds authoratative!

3) His coverage is balanced. First he interviews someone he agrees with. Then he quotes a mysterious background source who agrees with him. Then he quotes his own prior articles in the comment section. Three kinds of sources! That's balance! Haven't you ever seen a three-legged stool?

In the future, please be more respectful of the investigative journalist in this town. You know he's the only one who knows what's REALLY going on.

[Editor note - If this reader thinks that the cub reporter we mentioned yesterday is really a grizzly, then we can only imagine that in this reader's eyes, we must be…well, we don't know, something even bigger and more powerful…like…like a a 700-foot-tall mutant bear with X-ray vision and atomic breath or something. Or at least its journalistic equivalent, in stature, insight and destructive power.]