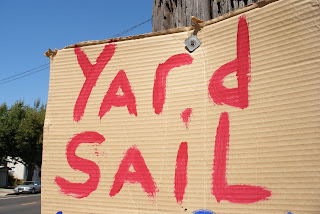 As all right-thinking Alamedans already know, the first of October is the day Captain "Cap'n Everett" Street holds his annual Yard Sail, where local treasure hunters delight in crusty nautical memorabilia by the steamer trunkful. The event takes place on the lawn in front of Cap'n Everett's home, which he keeps moored right next to his Rusty Scupper Family Seafood Restaurant on the Alameda Riviera. This is a festive affair indeed, with music provided by Alameda's own "Ja, und das ist Polka!" band, who perform their own rousing renditions of traditional German pirate songs. However, guests who party on into the wee hours of the morning, take warning! Once Cap'n Everett has had a few jiggers of rum, he invariably slashes his houseboat's moorings with his rigging knife, fires up the boilers, and starts steaming toward the open ocean. Those who overstay their welcome are at risk of being shanghaied into service on Cap'n Everett's crew, at least until the old salt sobers up again!