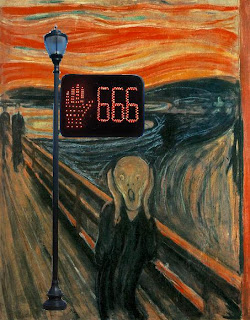 Yesterday, I returned to my home to find that an alteration had been made to the intersection at the corner on which I live. Now, with every turning of the traffic light, a pallid figure glowed ominously from within the black box mounted on a similarly coal-hued pole. Yet, almost as soon as this ghostly vision had appeared, it was replaced by a glowing hand, orange and searing as the flames of perdition. I hurried to the safety of my front door, and closed it against this unwelcome sight.

At once I telephoned the City. I asked why this monstrous contraption must impose almost upon my very doorstep, and how long I must bear it. The answer dashed my hopes, as it was revealed that the box was there to stay, in the name of some barbaric god called Safety.

Through the long evening that followed, I sat in my darkened living room, the rubber band sorting boxes, which normally afford me many a diverting hour, lying neglected before me. The open curtains admitted not only the familiar glow of streetlights, but also a thin beam of preternatural orange, alternating with deathly white. Every shift in this intrusive glare produced a sickening sensation upon my heart, as of the weight of a cold hand pressing against it.

At last, I sought relief in sweet oblivion and retired to my bed. Yet scarcely had my head found the comfort of a downy pillow when a peculiar sound impressed itself upon my consciousness. So faint it was, that I thought at first my wearied mind was playing tricks. It was as if some distant songbird were giving voice to dolorous plaints of yore, and then falling starkly silent. Such sounds had no place in the black of night, when songbirds rest as we do. But again and again the ritual repeated itself with unholy precision. What creature of the night was this that kept me from my rest?

Nerves on the stretch, I rose and sought the source of this unnatural emanation. As I approached my front door, the sound rose in volume, though always at an unvarying pitch. A horrid certainty seized me, even as I reached to open the door, but there was no turning back. In a moment, my fears were all confirmed. Sound and light conspired in unmistakable synchrony. Oh, woeful fate! Nevermore shall I know peace! It was plain to me at last what sound had banished sleep: it was the chirping of that sinister signal!