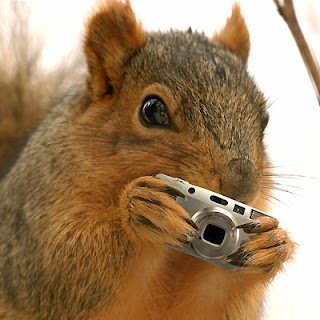 I snapped a picture of this Squirrel in front of my house, and as you can see, it had just finished snapping a picture of its own! I'm sure that my house number was visible in the photo. The Squirrel was clearly spying on me. Everyone knows that Squirrels are acting as spies, as reported in the Alameda Daily Noose and the other major news media. It is clear that the Squirrels discriminate against me because I am a Cal fan. Everyone knows that Squirrels have a longstanding relationship with Stanford, and were extremely influential in establishing that team's arboreal mascot.

Can I expect Squirrels to sneak into my front yard in the middle of the night and bury acorns that will grow into massive, property value destroying trees?

Ah, but who indeed, are the ones behind this shady activity. There is plenty of evidence to suggest that this is the work of Big Arborist. I don't actually have any of this evidence, so the City Council needs to investigate this. Perhaps the Alameda Secret Police even need to investigate this as a war crime. After all, everyone knows that Alameda is the front line in the Global War on Squirrels.

The pic is awesome!!