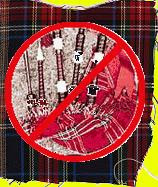 On Friday, August 31, 2007, the Alameda Fly-Swatter published one news story about Bagpipes, which they have since removed from their interweb site and are now shamefully charging people money to view. During the subsequent 21 days, the Fly-Swatter published no news stories about Bagpipes. The paper's drought of Bagpipe news ended with one Bagpipe news story published in its September 22 edition. The tardy "Alameda" Fly-Swatter's story recounts a tragic incident in which over 100 people were trapped in a room and subjected to the unspeakable torture of Bagpipe music. Sadly, no-one emerged from that chamber of horrors unscathed.

No newspaper worthy of the word "Alameda" in its masthead would neglect its duty to inform Alamedans of the Tartan threat for so long. So great was this misdeed that the Alameda Daily Noose and I have devoted the past 11 days to an unprecedented extended tut-tut-tutting, culminating with today's final devastating tch-tch-tch!