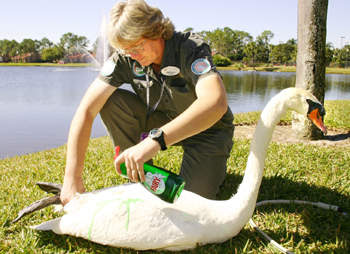 Concerned residents of Alameda's Marina Village are in a flap over the predicament of the swans that frequent the development's artificial ponds. "I bought my house here solely for the brilliant white swans I saw in the pond. Well, that and Alameda's Squirrel-limiting 'Measure Acorn.'" explained long-time resident Madge Kerfuffle. "Lately, the swans have been more of a charcoal gray. I don't have any so-called evidence to back this up, but I'm just sure it's due to all of the dirty politics in this town, particularly that Manhattanite musician on the Traffic Board. What's his name again? Anyway, if this problem isn't fixed immediately, we homeowners demand to be compensated for the drop in our property values. We're not sure the City Council realizes this, but we pay taxes, the very taxes that feather their cushy nests! I am madder than a wet hen about all of this blatant swan-dirtying corruption, and there's no way I'm going to let them duck the issue."

Fortunately, help is on the way. As you can see in the Alameda Daily Noose photo above, employees of Alameda's newly created Department of Animal Sanitation Services are hard at work soaking the soiled swans in Palmolive® brand dishwashing liquid. Homeowners were taken aback by the City's quick response. The Mayor explained: "Normally, instead of taking action we would hold a secret meeting in a smoke-filled back room in order to hatch a scheme to cover something like this up. However, once a couple of homeowners stood up and delivered the shock news that they actually pay taxes, we knew our goose was cooked. We formed the Department of Animal Sanitation Services the next day, using that big pot of their property tax money we discovered under the table in the back room. There goes our nest egg!"