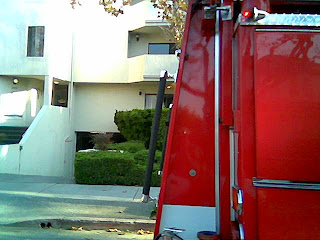 The photo clearly shows the excitement of a fire in an apartment building in Alameda. As you know, Alameda currently disallows multi-units, like apartment buildings, to be constructed. One of the many reasons that voters decided to do this, was because multiple units can catch on fire, as proven by this photo of a fire engine, parked in front of it, while responding to what appears to have been a fire.

Clearly measure A protects us from conflagrations like the ones they are having in Southern California where they have movie stars and multiple units, sometimes even mixing together! Imagine what would have happened if the voters haven't passed Measure A, the entire island might be fire causing apartment buildings.

You're the best journalist ever,