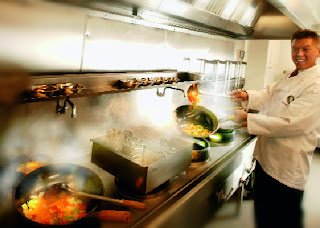 The 2,213th annual Han Woks Night will be held tonight, giving diners a chance to take a wok on the wild side by sampling some of the finest Chinese cuisine our Treasured Island has to offer. For one special night only, famous chefs will be flown in from all over Alameda to compete for the coveted Golden Wok.

Han Woks Night takes its name from the Han Dynasty, which ruled Alameda from 206 B.C. to 220 A.D. It is commonly considered to be one of the greatest periods in the history of Alameda, surpassed only by the current Golden Age ushered in by the passage of Squirrel-limiting "Measure Acorn" in 1971.

The superstar chefs in tonight's competition will be judged on their ability to create dishes in the following categories, each of which embodies an aspect of the perfection that is Alameda Chinese food:

Sadly, some more recent additions to Alameda's Chinese restaurant scene, such as that new place next door to the hippie grocery store, have abandoned the 2,213-year-old traditions of Han Woks Night in favor of quote-unquote upscale interpretations of traditional Alameda Chinese dishes. While such places might be favored by soulless yuppies like that Harry Potter look-alike who heads up the Transit Committee—what's his name again?—all right-thinking Alamedans reject this base corruption of our glorious heritage. What, you mean there's no plastic tub of plum sauce on the table? Shame!

For those who know good Alameda Chinese food, tickets are $20.00 in advance and $25.00 the night of the event. Advance tickets are available at Alameda Daily Noose World Headquarters, located on the Big Island of Alameda. For more information phone 522-2208.