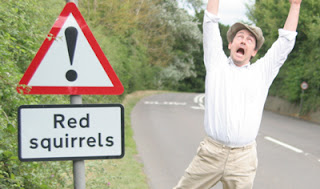 As I'm sure your readers already know, Alameda is the greatest island in the world. I recently vacationed on another island, the Isle of Wight, and let me tell you, there is no comparison. Although the Isle of Wight, much like Alameda, is an island famous for its grand Victorians, including Alfred Lord Tennyson and Princess Beatrice, such assets are overshadowed by the many problems afflicting Wight.

For starters, there are way too many tourists there. We should be glad that Alameda doesn't attract outsiders at that rate. Even the lack of bridges doesn't seem to keep them away from the Isle of Wight!

But it gets worse. Inhabitants of the Isle of Wight not only play Bagpipes, they also produce them. Can you imagine what the Bagpipe traffic on our streets would be like if Alameda allowed that kind of commercial activity?

And of course, wherever there are bagpipes, you will also find Squirrels. Amazingly, people on the Isle of Wight not only allow this dangerous state of affairs to continue, they actively encourage growth of the Squirrel population! As you can see in my vacation photo above, I spent my entire trip in fear of running afoul of one of Wight's notorious Red Squirrels. I never saw one, but I'm not sure that they didn't see me. I can only hope that none of those bushy-tailed terrorists followed me home to Alameda.

Oh, it's so good to be back. I wouldn't recommend the Isle of Wight as a vacation spot for any Alamedan, unless maybe that guy who runs the Transport Ministry - I can never remember his name. Of course, if people like him had had their way, they would probably have knocked down all of the grand Victorians and replaced them with high-density housing, thus depriving English literature of one of its greatest poets and, more tragically, making Wight's woeful traffic even worse.